Thanks to Bitcoin and its recent surge in popularity, the terms “blockchain” and “blockchain technology” have entered into our common consciousness and become a big part of everyday vocabulary. Hardly a day goes by without some major publication talking about blockchain technology and how it’s going to change the world.

For the most part, the media coverage targets a particular demographic: tech savvy, investment-types who have known about cryptocurrencies and blockchain long before the rest of us ever heard those terms. But what about the vast majority of people who aren’t quite sure what blockchain is and why it is such a big deal? Read on for an easy-to-understand introduction and some guidance to help businesses decide when it’s appropriate to adopt a blockchain solution.

So what exactly is blockchain?

Because blockchain first became popular as the technology behind Bitcoin, many have come to regard the two as interchangeable. However, there are clear distinctions between the two: Bitcoin is a cryptocurrency, which was specifically designed to facilitate payments without third-party intermediaries, such as banks or governments getting involved. Blockchain on the other hand, is the technology that underpins Bitcoin.

Having made that distinction, let’s now focus on how blockchain works.

How does blockchain work?

Unlike a traditional ledger, which is kept in a central repository, blockchain is decentralized. This means that all participants (nodes) in the blockchain’s network have access to the ledger and can conduct and validate transactions on it. This decentralized nature of blockchain is its main advantage because, while centralized data is easier to control, it is also easier to manipulate. By decentralizing data, blockchain makes that data transparent to everyone involved, and eliminates the likelihood of fraud.

With this simplistic description of blockchain in mind, let’s now try to understand what makes this technology so special.

1. The immutable nature of blockchain data

Blockchains are continually growing as new blocks are recorded and added in chronological order. Each block is linked, assembled and secured with the use of a peer-to-peer network where members adhere to a protocol for making and validating new blocks. Blocks hold batches of valid transactions (or facts) that are hashed and encoded. Those facts can be anything from monetary transactions to content signatures.

Each new block includes the hash of the previous block in the blockchain, linking the two and forming an immutable chain. This iterative process confirms the integrity of the previous block, all the way back to the original genesis block. This means that the data in any given block cannot be altered retroactively without altering subsequent blocks, which requires the collusion of the rest of the network. This is why data stored on blockchain is generally considered incorruptible, making it suitable for use where data integrity is important. For example:  medical records, identity management, transaction processing, voting, food traceability, establishing the provenance of documents and recording of events. 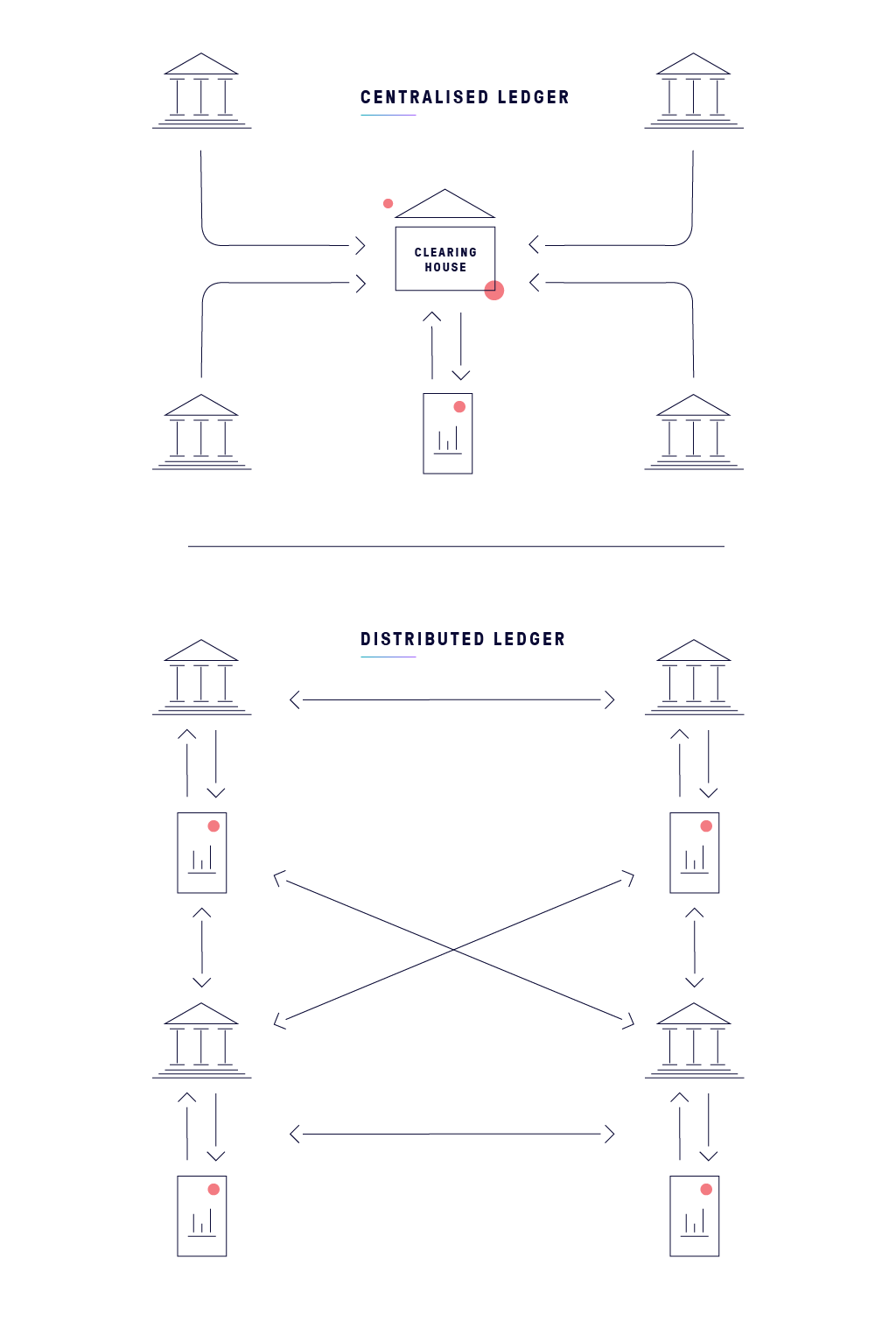 2. The consensus model of verification

When a new transaction or an edit is made to an existing transaction in a blockchain, the different nodes within the network execute algorithms to evaluate and verify that transaction. When all nodes reach a consensus about the validity of the incoming transaction, the new block is accepted and merged into the shared ledger. If there’s no consensus, the transaction is not merged, but a record of the intent is registered for record purposes.

This consensus model is what allows blockchain to run as a distributed ledger, without the need for a central authority to determine which transactions are valid and which are not. 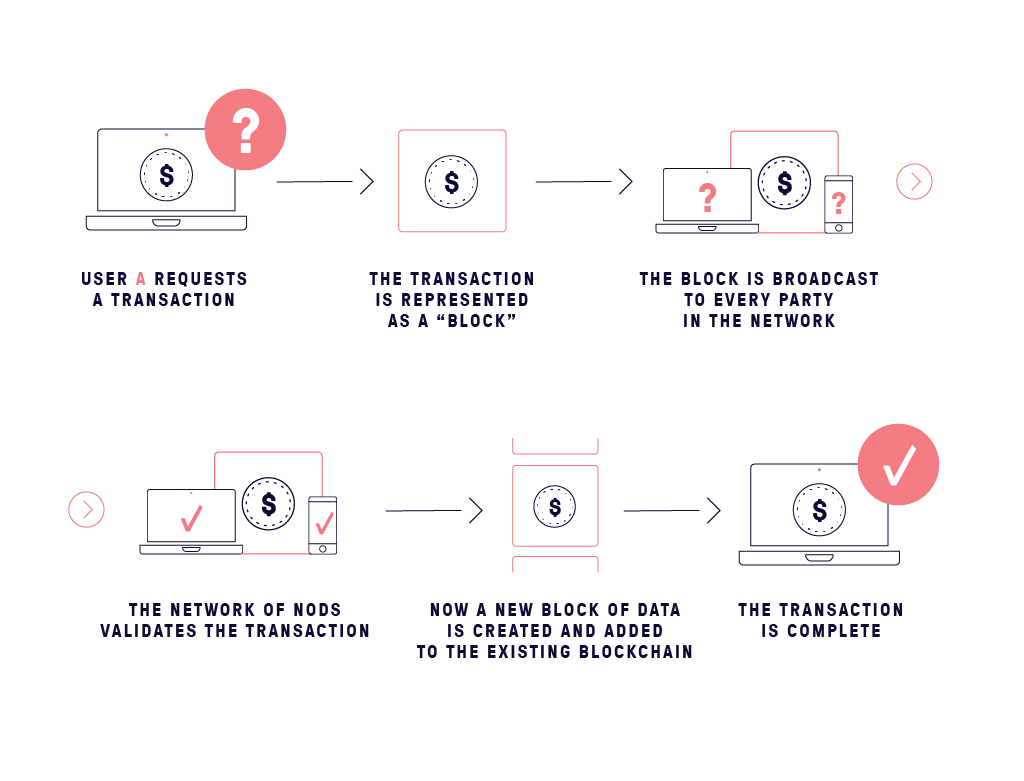 3. The transparent nature of blockchain processes

One of the key attributes of blockchain is its ability to facilitate transactions between entities with a mutual distrust of each other. Such entities can exchange value and transact without relying on a trusted third party because blockchain’s two-tier transaction verification process, validates the integrity of their transaction and promotes transparency. One set of participants, verifiers, confirm transactions while other participants, observers, detect changes in the ledger and confirm that all transactions were properly executed. Eventually, all participants have the same view on their “copy” of the ledger.

Redundancy is one of the major disadvantages of a centralized system as information has to be replicated on different physical servers, which is both time and cost inefficient. With blockchain, the ledger is replicated across all the writers automatically.

With all of these advantages, blockchain technology lends itself to multiple uses for businesses.  There are a variety of reasons why businesses should adopt blockchain technology. One reason is the opportunity to transform the way we do business by providing a standard architecture that addresses various business and organizational problems. For instance: 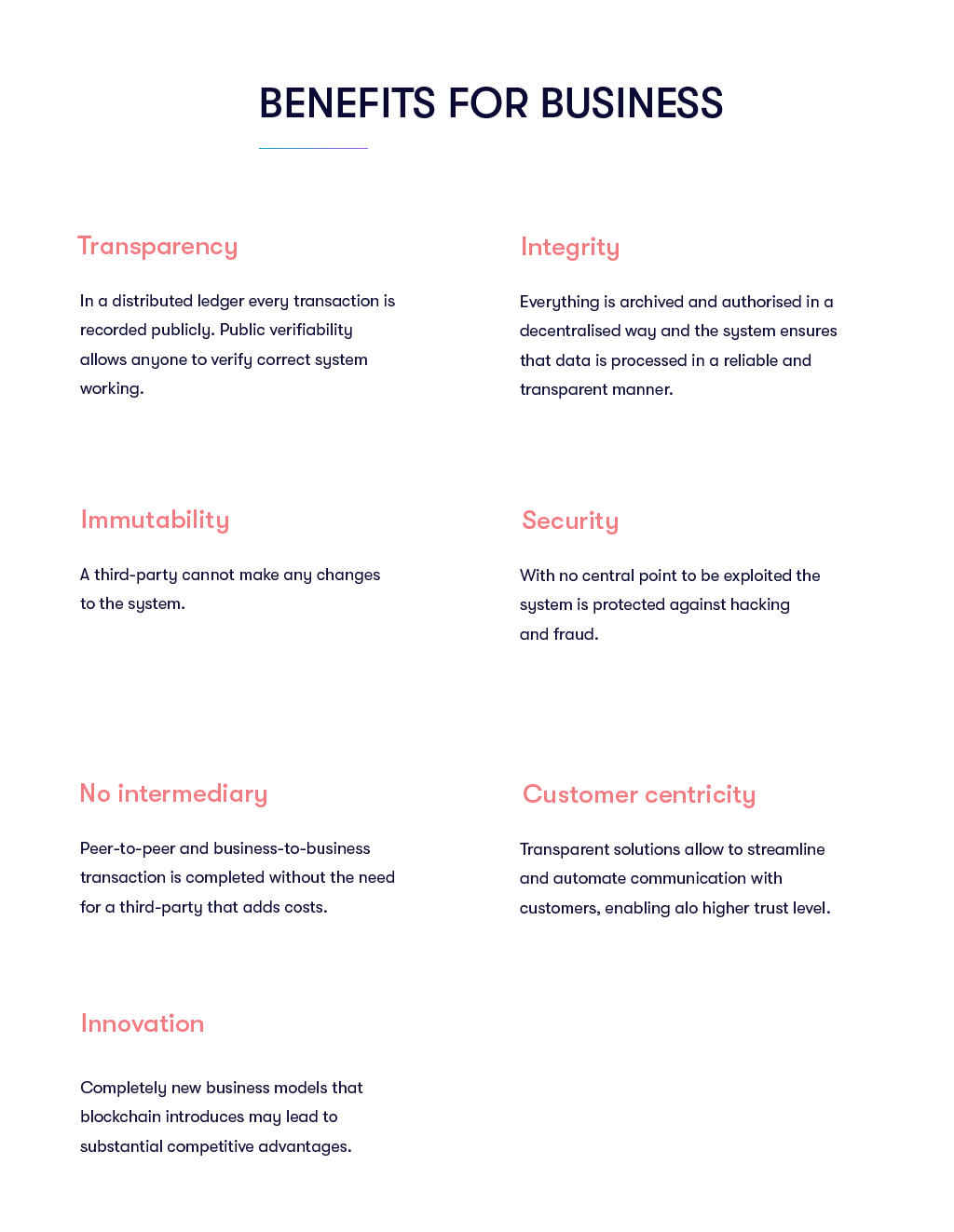 Successful, forward-thinking companies are turning to blockchain technology to improve efficiency and decrease the risk of fraud or unnecessary tampering with information. Such companies include:

When to use blockchain for a business

Now that we understand blockchain, how do we know when it’s good for business? Using Blockchain only makes sense when multiple, mutually mistrusting entities want to interact and change the state of a system, and are not willing to agree on an online trusted third party. A blockchain network with only one participant would be a waste of resources and add an unnecessary layer of complexity. If the network is composed of multiple participants, then the next question would be whether there is a trusted, always-available third-party responsible for verifying all of the state transitions of the ledger and notifying of changes. If all the network participants are known and trusted, then there is no need to use blockchain and a conventional business network would suffice. Otherwise, using blockchain would be a good option, then necessitating a decision as to which type of blockchain is better in that scenario. The following flow chart is designed to make the decision-making process easier: 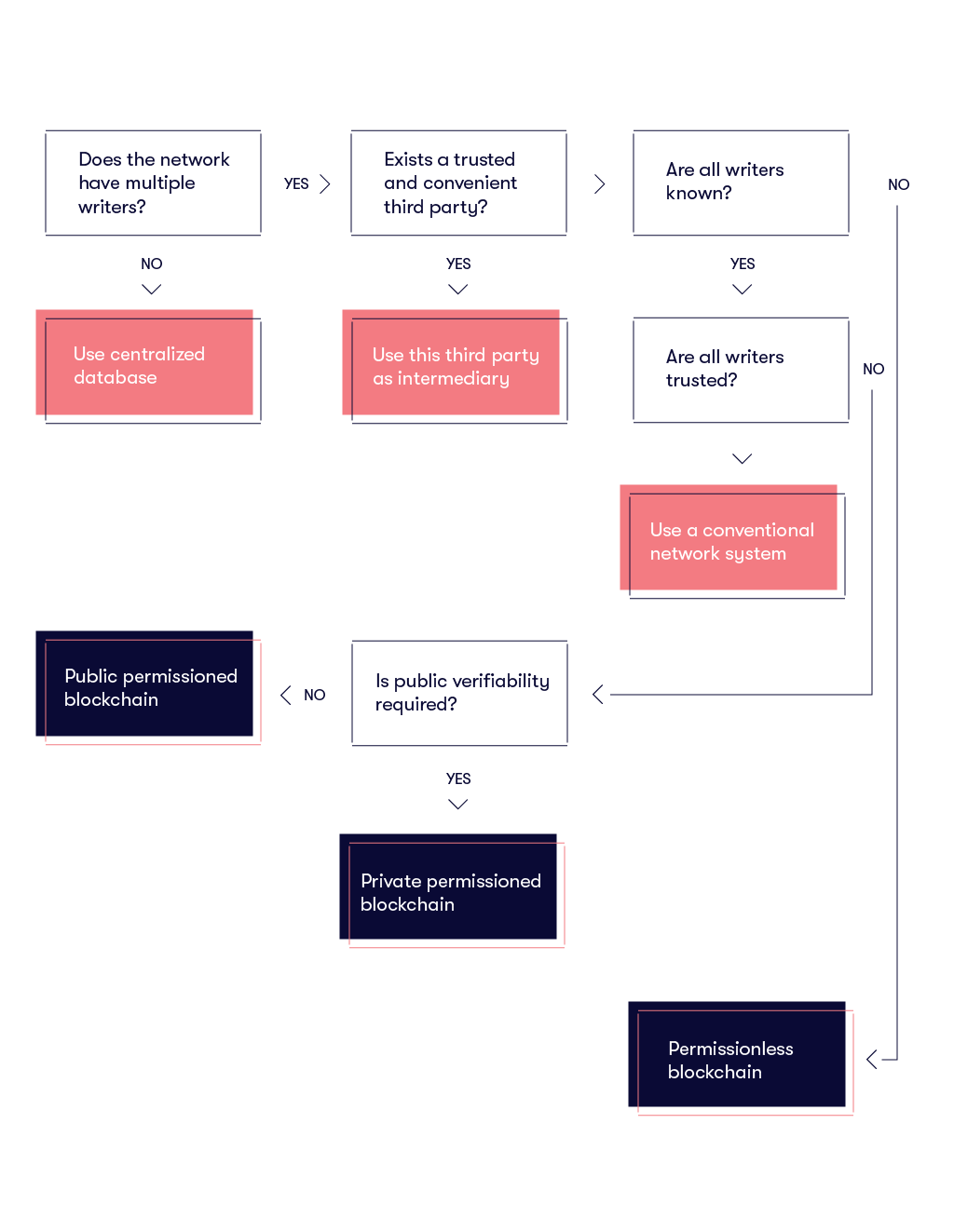 The uses and benefits of blockchain are much wider than virtual currencies. It can be applied in countless areas, including in business, regardless of the size of the entity. While early adoption of new technologies can be a gamble, blockchain has shown itself to be so versatile and advantageous that many businesses have become eager to explore how they can use the technology to their advantage. The pioneering businesses that start engaging with blockchain technology now will have the opportunity to shape how the rest of their industry uses blockchain, and thus gaining a competitive advantage over late adopters.

We hope this helps you understand blockchain and its use cases. If you have any questions, leave us a comment and we can discuss!