Earlier this year, we continued our sponsorship of RailsConf and this time in Phoenix, Arizona. Once our sponsorship was confirmed, we immediately went to work planning what we wanted to do: swag to bring, cool games to share. Of course, you never want to be short on company t-shirts and stickers! And it’s a good exercise as technologists to think about different games and topics that will separate you from the competition, to catch people’s eyes, or get the conversation going.

Being a company with multinational offices, we came together in Phoenix from South America, Austin, and New York. Once at the hotel, we started preparing our things for the conference – including tracking down a package to one of the hotel warehouses! 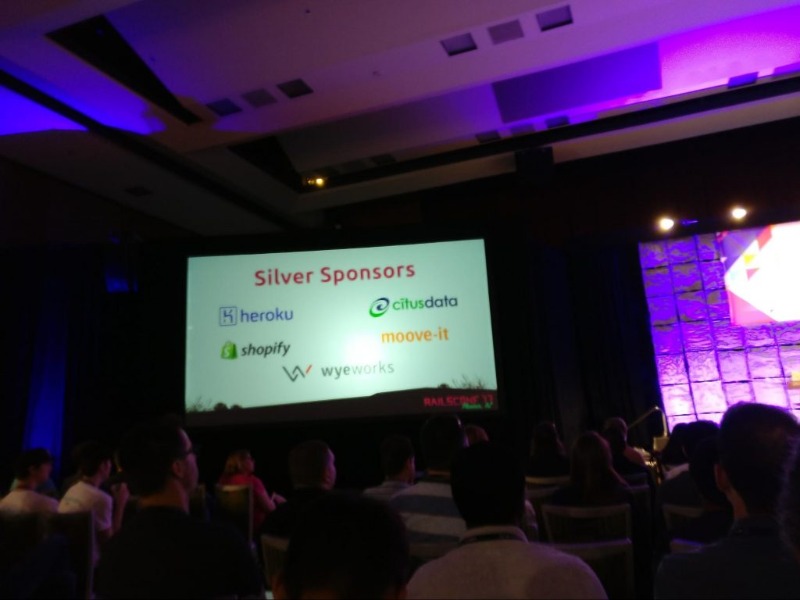 Day 1: Setting Up
This is always one of the more exciting days: go early, register, explore the convention center and attend the keynote. After checking out a few talks, it was time to prepare our booth. A lot of design work had gone into preparing and we were proud of the results and layout: 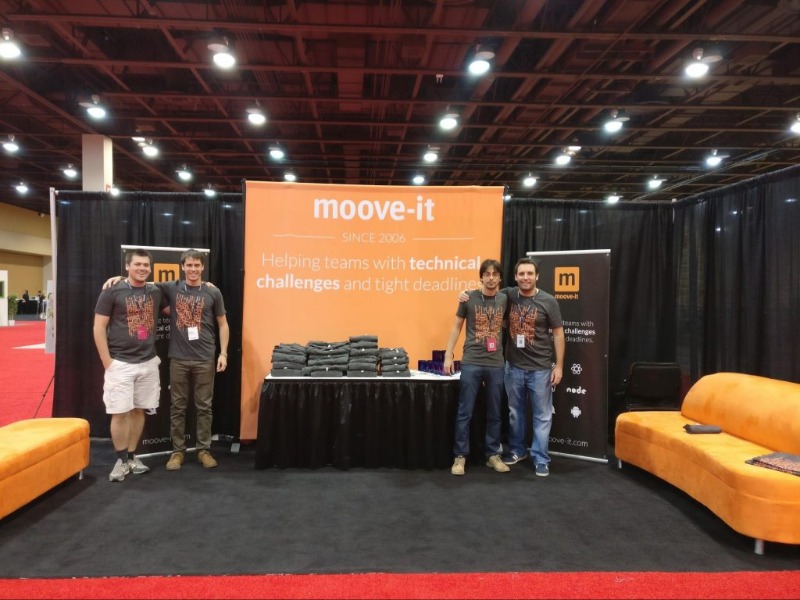 One of our main goals at the booth was to engage with people: talk about what they were doing and our own software development. We’re always looking for people who are interested in joining our team, as well as for people looking to hire our software consulting and development services.

At day’s end, we were ready for the exhibit hall opening. We had our t-shirts, mugs, and stickers to give away, as well as two drone quadcopters as giveaway prizes. (Fun Fact: The head of security came to talk to us to make sure we weren’t going to fly the drone inside the building; an alarm would go off and everyone would have to be evacuated! But no, they were only there for display.)

After setting up the booth we went back in time to watch the keynote of the day and head out to the night’s party. It was a packed bar called The Duce in Phoenix’s Warehouse District. We met a lot of fun people from across the US and Europe! 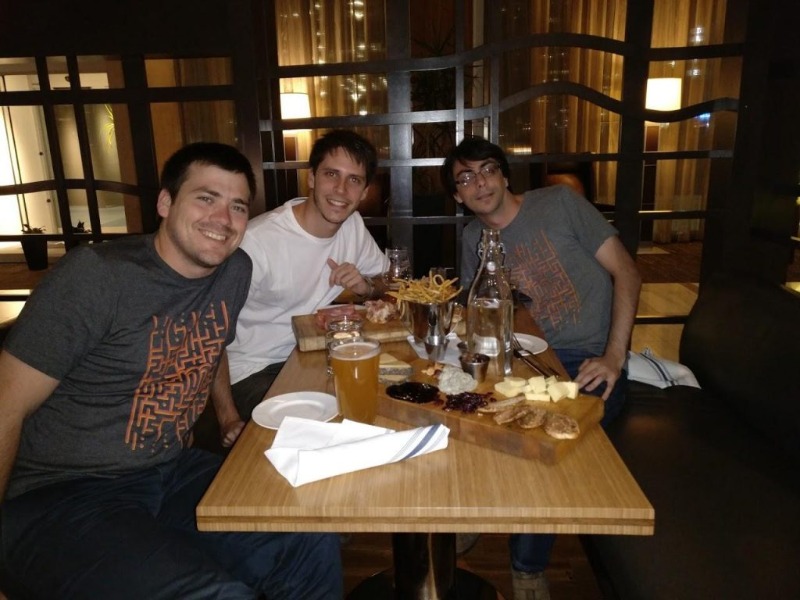 Day 2: Trivia Time!
To begin Day 2, at 10am the conference opened and a tsunami of developers washed over us. In a matter of minutes, hundreds of people descended upon the exhibit hall and we could barely finish a conversation with one person before the next was asking questions or wanting swag! After about 15 minutes, things calmed down and we were able to have more meaningful discussions with people. 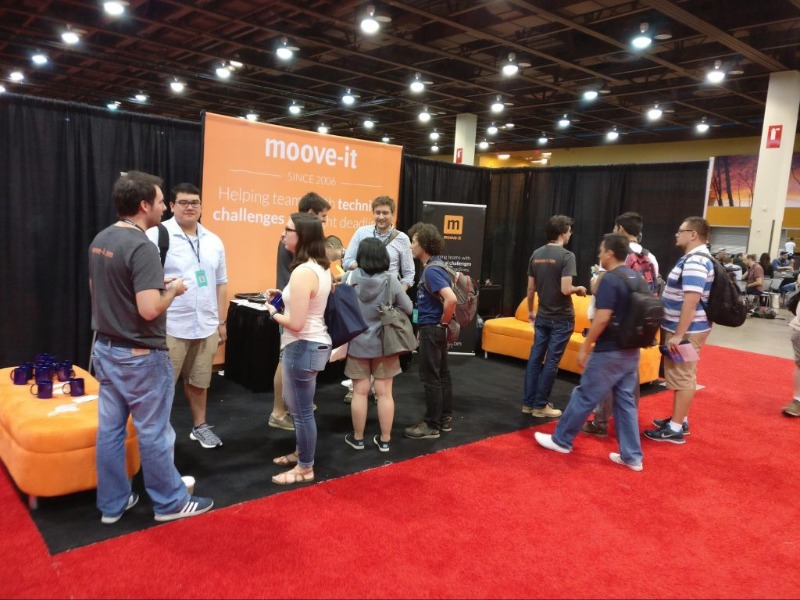 As a fun way to engage with other developers, we had brought trivia questions about Ruby and JavaScript. Our entire office got together a couple of months before the conference to collaborate, creating questions that challenged Ruby and JavaScript knowledge. Both languages have some unexpected behaviors under specific circumstances. Our 30 question/answer cards were quite the success! Attendees absolutely loved it and a lot of them came back during the quiet hours to sift through all of them and challenge each other to see who knew the answers. 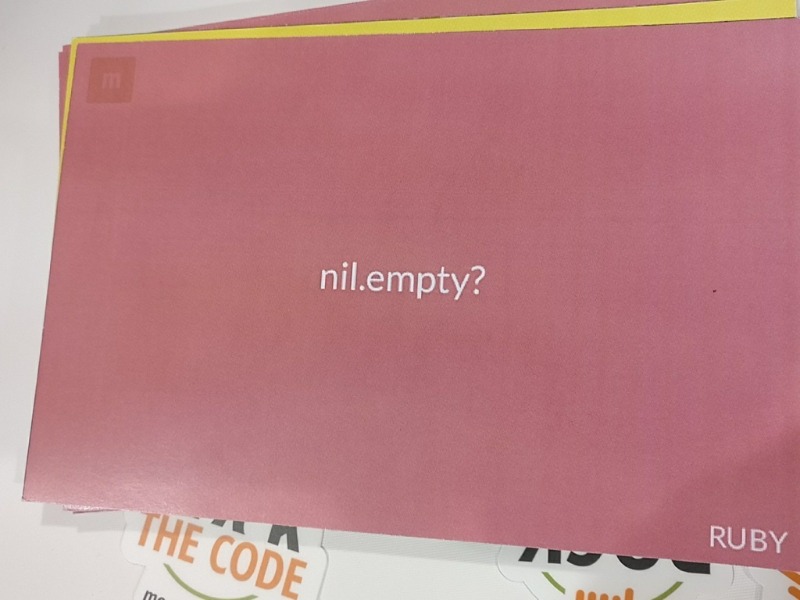 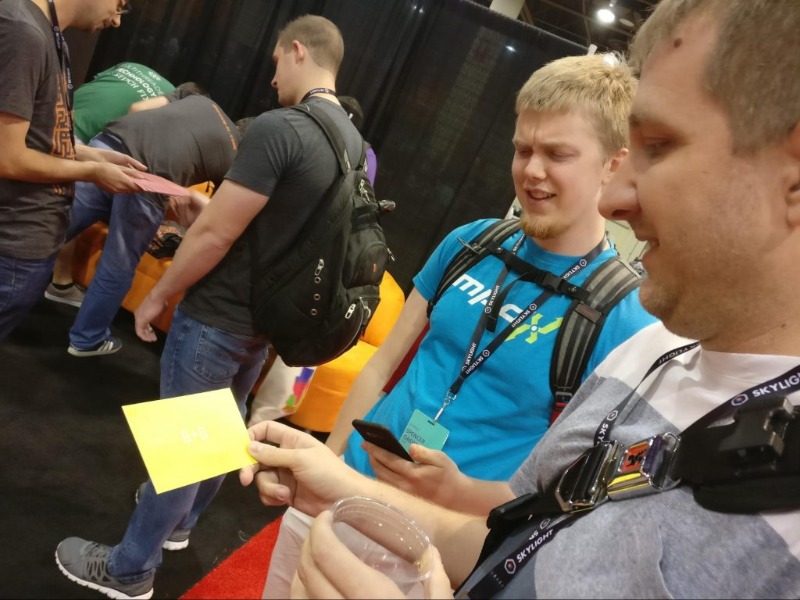 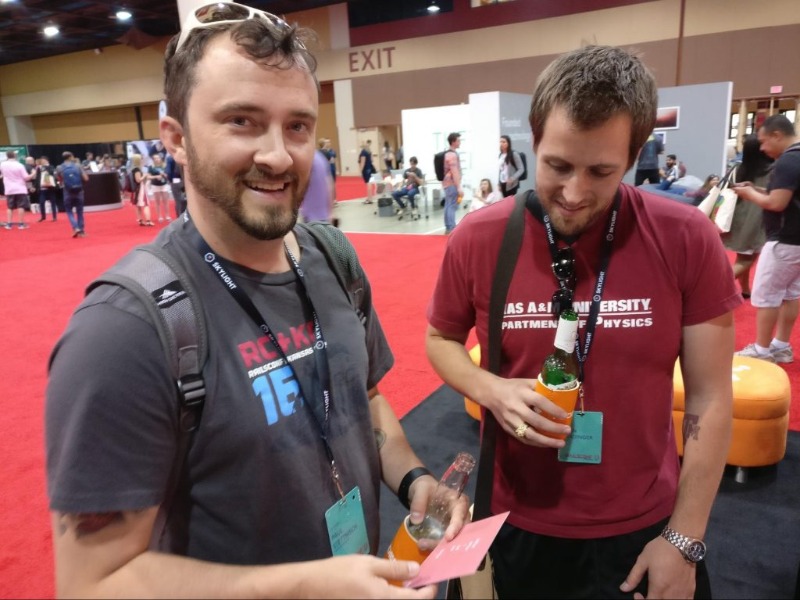 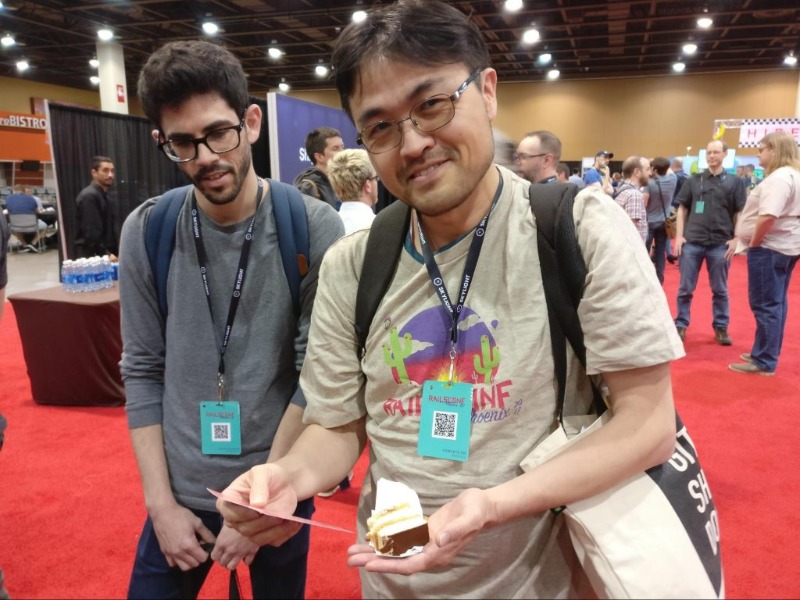 On this day we also met Aaron Patterson, one of the most notable developers in the Ruby Community. He’s part of the Ruby Core and the Rails Core, so he constantly works on the software that we use to run a lot of our clients’ applications. 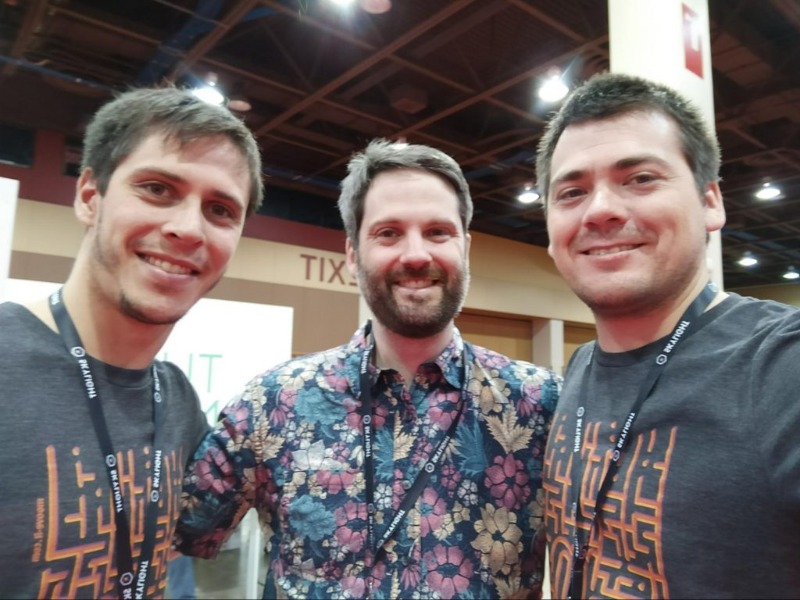 Day 3: Drones’ Giveaway
On our last day of RailsConf, between restocking our swag and chatting with new people, we were giving away the drones. We had a long list of people who had applied to win. Around noon we drew names and our winners were Tori Brown (@vibro15) and Gaurish Sharma (@gaurish)! Here are the happy winners: 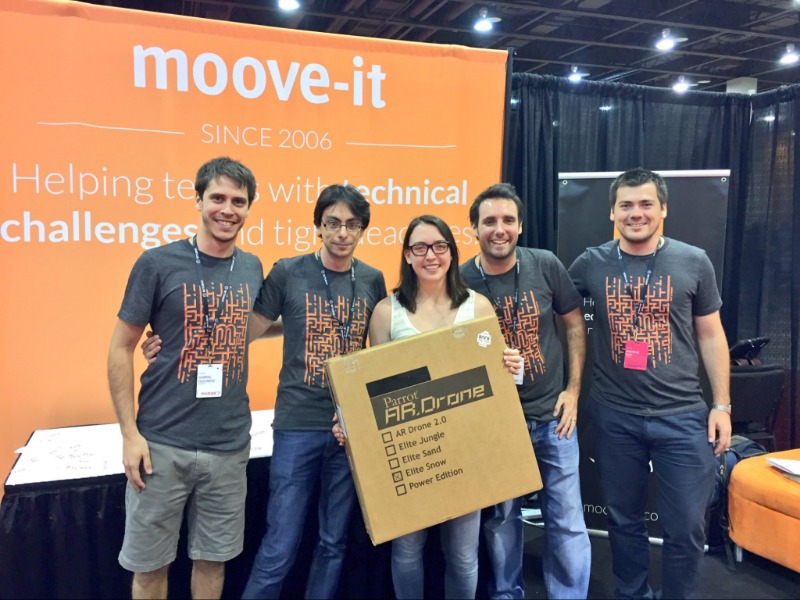 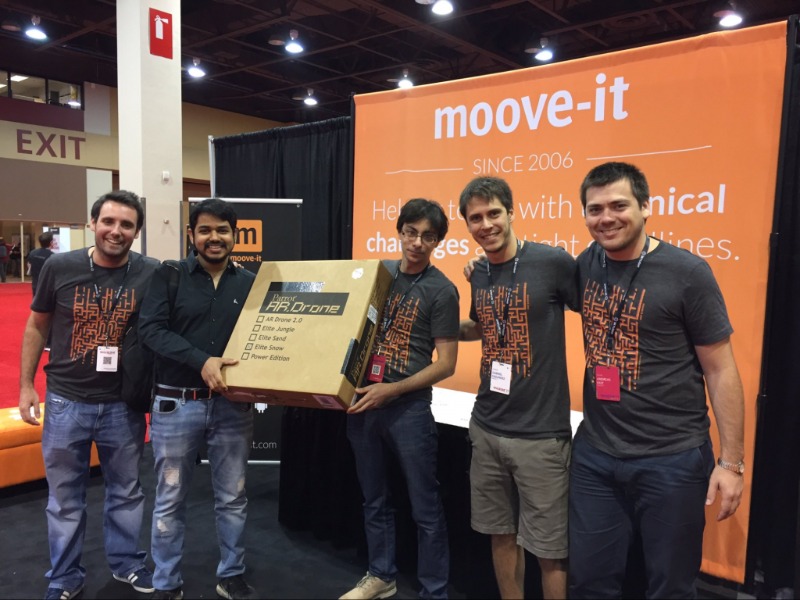 We had one other big event left for the afternoon: Our sponsor presentation! As a Ruby on Rails Development Company and part of the Ruby community, Moove-it loves and embraces open-source. We’ve put out a number of libraries and are actively maintaining Sidekiq-Scheduler: A gem (library) that enables scheduling of recurring background jobs working as a plugin for Sidekiq (the most popular background job processing gem). We also took a picture with the author of the Sidekiq gem. 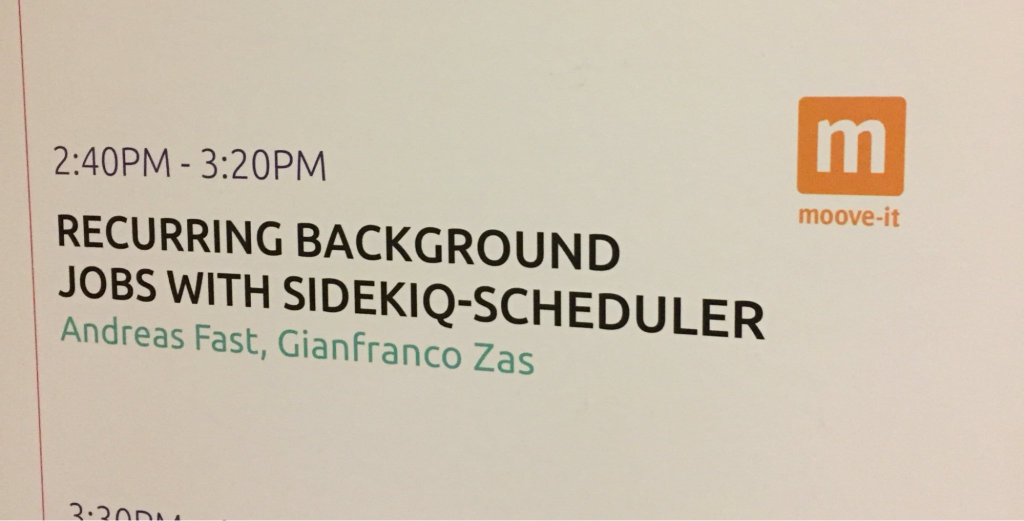 Until next time!
To close out the conference, our team went out to eat before going our separate ways: some back to Uruguay, others to Tennessee and Texas. 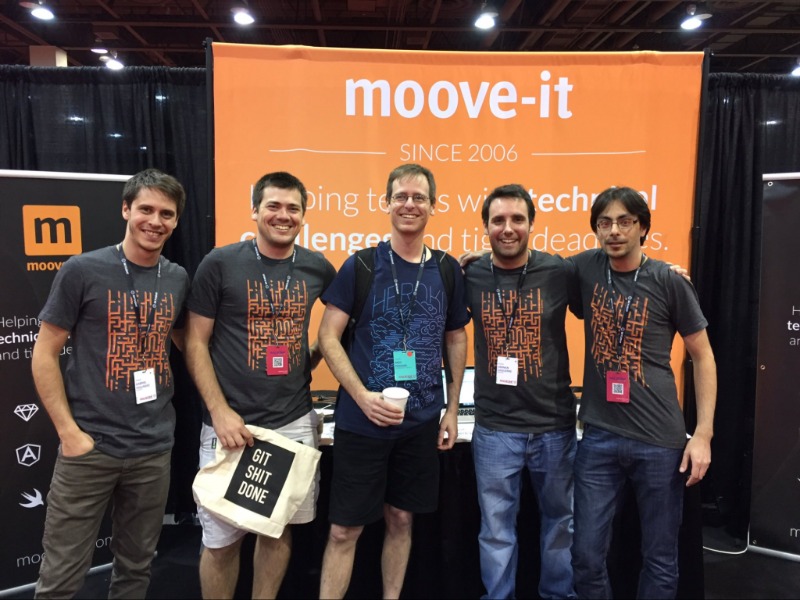